Other firms see their job as simply laying a floor, we see it as protecting your company.

Flooring is one of the most complex things you’ll deal with in a construction or refurb project, especially when you’re working to tight timings or strict regs.

When it goes wrong, it’s your revenue and reputation on the line.

That’s why if we don’t think we can do the job right, we won’t take it on.

We’d never gamble with your good name or our own.

our background
our ethos
meet our team

We don’t expect you to be as fanatical about flooring as we are but we’d love to show you what’s possible. Please come and visit our showroom anytime.

We have been lucky enough to be laying the highest quality flooring for some of the UK’s leading companies since 2009.

But our senior team have been in the business for their entire working lives, with over 30 years of practical experience.

There’s no challenge we haven’t faced and we’re always happy to give advice. Just ask.

a code to live by

The key ingredient in flooring is timing, so we run a tight ship and work to meticulous standards.

We recommend what’s best for our clients and never pressure anyone to do things just because it would be best for us.

We have a lot to be proud of but we don’t rely on past successes, we’re still hungry to do things better.

give back and do your bit

We give back wherever we can.  Our chosen charity is the Prince of Wales Hospice in our local community and Ocean Revival who are raising awareness of plastic waste in our oceans.  Caring for the environment is essential, and with our ISO 14001 certification, we ensure continuous improvement towards making a positive difference. Check out our full environmental policy here.

I arrived to work this morning, and was delighted to be informed of the excellent works undertaken to provide the new floor finishes to our auction hall in Manchester. Feedback from the GM and the AGM has been positive and very complimentary. I would like to extend the praise and thank you for an excellent delivery. Well done!

I just thought I’d drop you a quick note to say I am very impressed with the team’s performance today. From start to finish an excellent, clean and tidy job.

I just thought that I would drop you a line to pass on the thanks from our Site Manager and myself for the recent works completed by yourselves. He told me the lads did a great job, were done when they said they would be, left the area very clean and tidy, and the standard of work was good too! Please pass on our thanks to you and the lads involved.

Milestone provided a very professional, first class service and I will use them again for all our resin works going forward and would highly recommend them.

The guys have just left site and I wanted to drop you a quick note to say they have done a superb job and I thought I would take the opportunity to thank you personally. They have done a top job! If the same crew could do our upcoming project I would appreciate it.

When your installation team arrived on site, they couldn’t start due to delays our end. When conditions finally enabled work to start, your team worked through the weekend, burning the midnight oil to make sure we were back on schedule. The finished product is stunning and really compliments the substantial investment Breeze Motor Group have made in this facility.

Everything we deliver for our customers is because of our team and their hardworking determination to do a good job. They’re a good bunch. 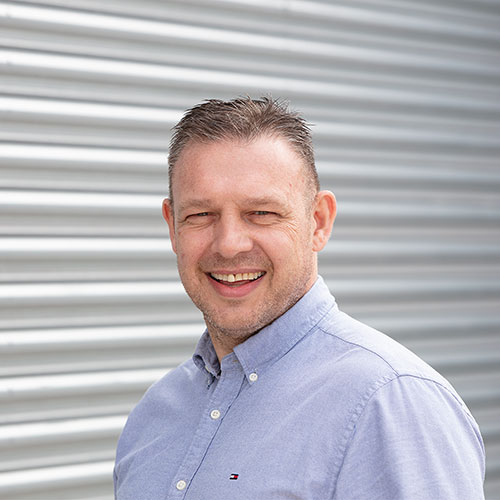 Peter runs Milestone as a tight ship and ensures everyone here feels valued, happy and understands the vision.

The result is a down-to-earth, family orientated team with the combined drive that has made us a major player in the UK industry.

Peter has made flooring his life’s work, but loves spending his time hiking in the outdoors and spending time with his family.

Every single installation is executed to his exacting standards, delivering seamless service and fantastic floors every time. 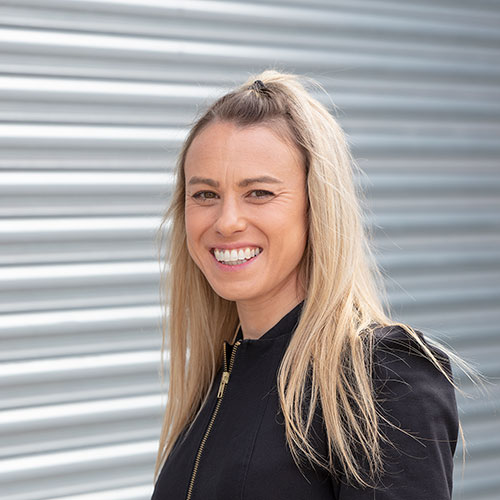 An organiser at heart, Zoe helps ensure every project we take on at Milestone runs smoothly from start to finish.

As Compliance Director, Zoe keeps Milestone running smoothly, managing the customer and accounts teams, along with HR. All on top of managing and balancing the lives of the large and lively Harrison family!

Following a Degree in Psychology and Criminology, Zoe spent a decade in the prison service, working with offenders. She joined Milestone in 2012 and loves working alongside her husband Peter, as well as her close-knit team. 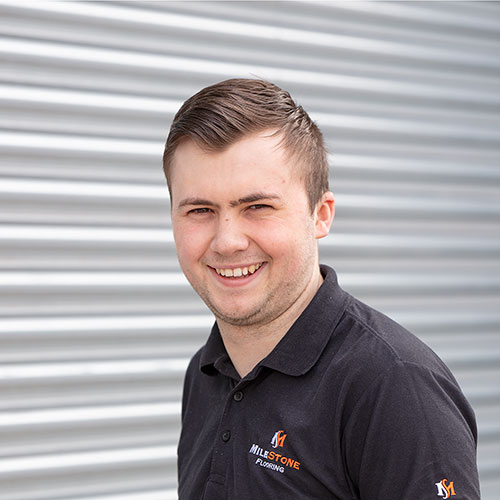 Edward supports Huddersfield Town, but we don’t hold it against him.

Model student Edward gained a First in Business management at Leeds Trinity University, and joined Milestone for his first full-time position. He’s responsible for our marketing and social media – creating and publishing exciting new content as well as coming up with a winning strategy.

He also works as the main link for the sales team, running the processes that link data together and ensure our records are kept up to date and inline.

And as if that wasn’t enough, he’s on hand for our IT support as and when it’s needed in the office. 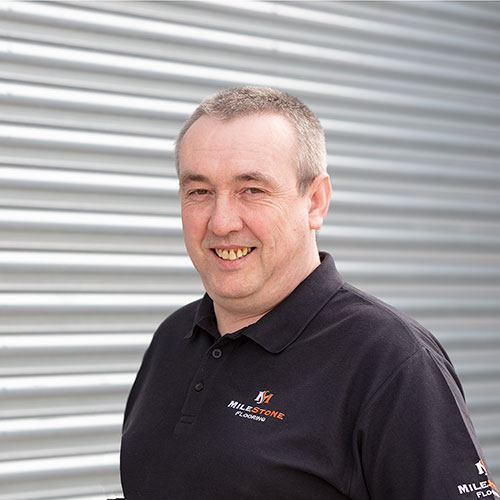 With over 15 years of Health and Safety management under his belt, you’re in safe hands when you work with Dave.

From a career in the Army to working at Galliford Try and then fully qualifying as a Health and Safety adviser in 2004, Dave has spent his entire career keeping people safe.

Along with generating Risk Assessments and ensuring all health and safety protocols are followed. He’s never happier than when he knows everyone is programmed in and working safely at full capacity. 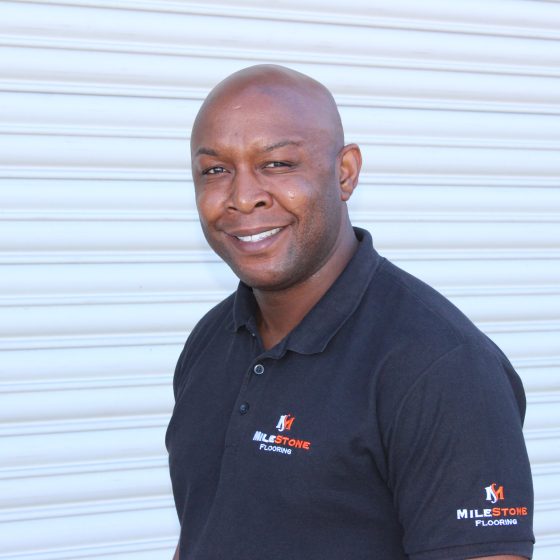 Jermaine, known by his friends and colleagues as ‘Jam’, has an infectious energy to drive success throughout the business.

Prioritising communication, Jam loves team camaraderie and thrives in a construction environment organising and managing a project from pre-contract to completion.

Handing over a quality floor installation to score a happy client provides Jam with endorphins and adrenaline equal to his sporting passions: rugby, football and kickboxing! 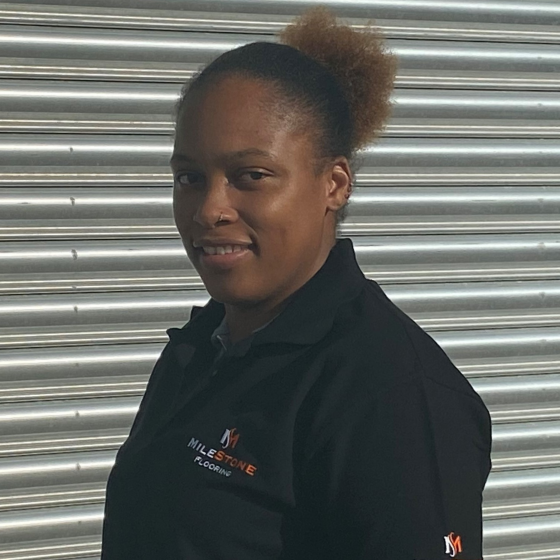 AKA ‘The Bossa Nova ’

Fiona brings a different beat to Milestone with a fast tempo attitude towards progression, and a slow tempo for consideration of the details.  Fiona is a real student of the construction industry, having completed a BSc degree in Construction Management, and she has graduated to develop her skills and techniques to hit the right notes here at Milestone.

As a star performer, there’s nothing that passes by Fiona as she analyses the situation and data to find the best possible solution for the task at hand.

Not satisfied with just recording hits on the job, in addition to spending time with her family Fiona loves to compose her tracks at home as she jams on the guitar. 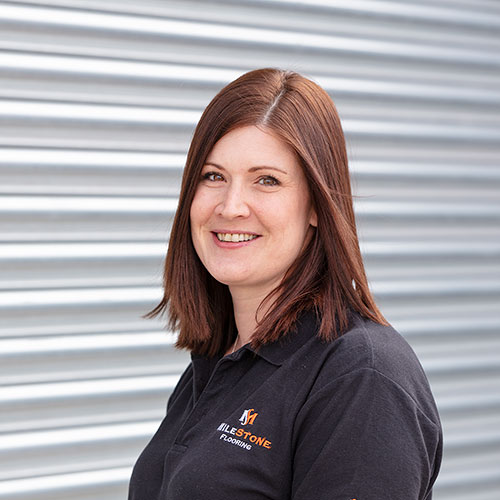 Louise has been working with figures for her whole adult life.

There’s nothing Louise doesn’t know about accounts – she’s done it all, from purchase & sales ledger to credit control and payroll.

She spends her days at Milestone dealing with everything financial; managing customer accounts, arranging credit and insurance, raising invoices and most importantly making sure everyone gets paid correctly.

Louise’s skills extend to outside the company with a passion and a talent for cake making. 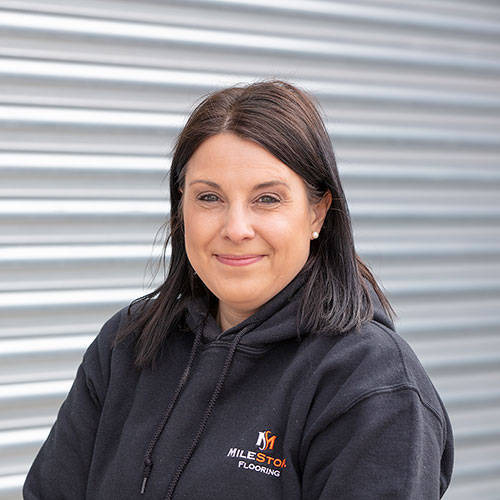 Louise has a background in travel and lettings, so is well used to ensuring everything runs smoothly.

Our office-based heroine, Louise deals with all our administration, holds the purse strings to the purchase ledger and handles the huge variety of tasks we throw at her (not often literally) with a smile on her face.

It’s fair to say she really does love helping others. 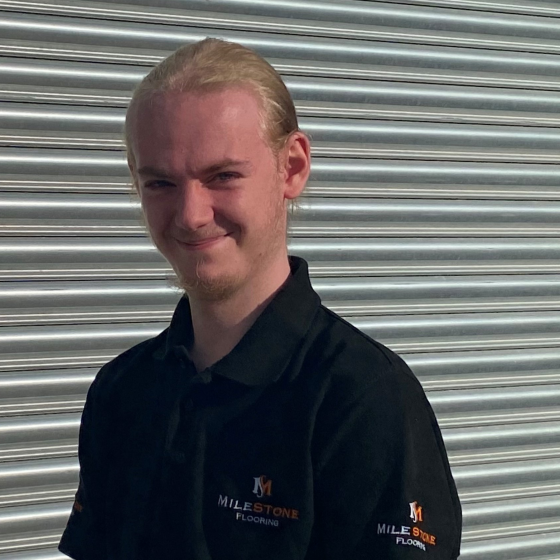 Liam equals a thirst for knowledge and a hunger to develop. His formula to take the first step on his career ladder and join our customer services team is the right angle for his progression.

Liam’s quick maths skills contribute to a variety of roles within our administrative team and he is taking on more responsibility with each passing day.

As a keen video game enthusiast, Liam has learnt the art of teamwork to achieve goals and reach objectives, something that will translate perfectly here at Milestone. 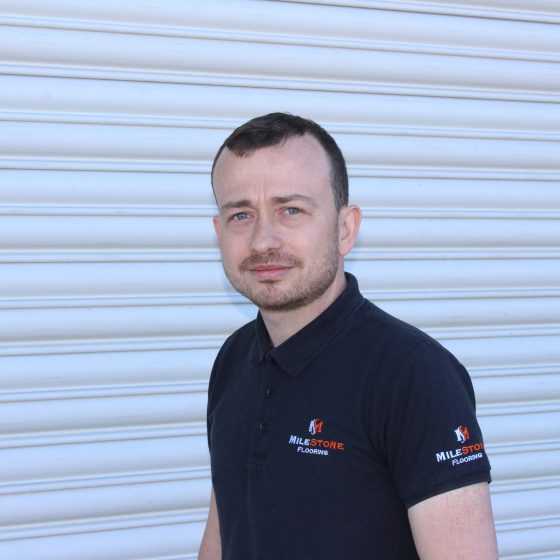 Dan never stops learning about new flooring systems and ways to solve problems before they arise.

Dan has been in the flooring industry for 14 years, progressing upwards to his senior estimating position.

He spends his days assessing tender documentation and sifting through sales leads, as well as dealing with the all-important quantities of material, labour and other elements. Dan turns a bundle of facts and figures into a detailed description of works and costs for our clients.

It’s no surprise then that he’s a seriously solution orientated member of the team. 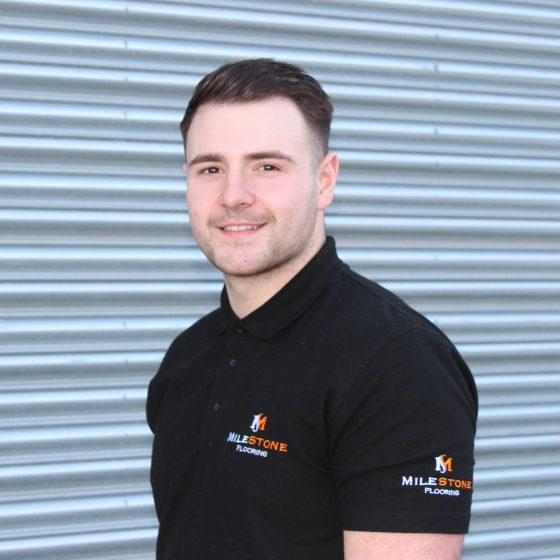 Aka ‘the box-to-box player’

Craig is eager to learn and gives tasks his all.  With his strong will,  he tackles tenders and sets personal goals to achieve so often chooses to step out of his comfort zone to challenge himself.

As a loyal Manchester United fan with team spirit at heart, Craig likes to maintain an upbeat office environment.  Although known for keeping a trick up his sleeve for his colleagues, he prides himself on maintaining a professional approach to ‘quote customers happy’ 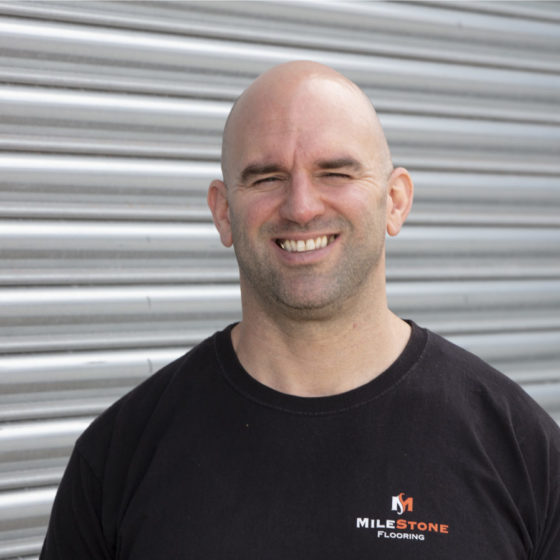 Precise, disciplined and tough both in and out of the warehouse.

James’ bodybuilding years have brought him widely acclaimed recognition within his sport.

He hopes to take centre stage within Milestone, bringing his humour and larger than life personality to the team. With a long-standing career in the Public Sector, his working style is clean, tidy and organised.

As Warehouse Manager James orders and manages stock, prepares and maintains vehicles and plant, and allocates materials and consumables to sites. Don’t mess with; or leave a mess for James! 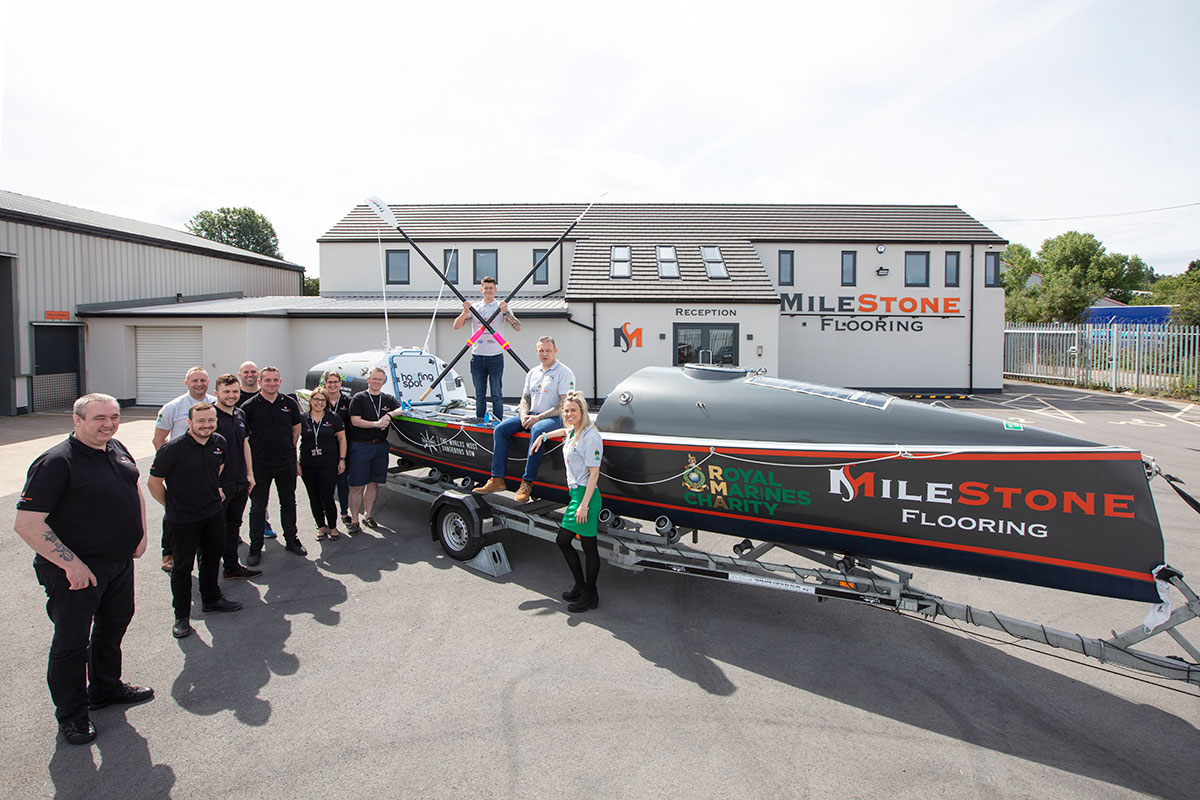 We are proud sponsors of Ocean Revival 2020

Milestone are extremely proud to be a platinum sponsor for the Ocean Revival 2020 charity row across the Atlantic Ocean. Supporting our own contracts manager, Dom Rogers, in his quest along with his crew members to achieve something that has never been done before, in rowing 3700 miles from New York to London Bridge dubbed ‘the worlds most dangerous row’.

Plastic Oceans UK are raising awareness of plastic contamination in the oceans and the harm it is causing to our wildlife. This is an issue that will not only affect us but generations to come. Milestone wholeheartedly support the Ocean Revival 2020 challenge and urge everyone to support it and think about how they can reduce their plastic waste and dispose of it responsibly.

You can find out more by visiting https://www.oceanrevival2020.com